I hereby present two of my most common traits; I tend to personify things. I tend to have some level of insomnia.

Insomnia might not sound like such a big deal for those who have not had it. But in addition to messing up your nights (hence also your days), insomnia is both a cause for and an effect of mental diagnoses like anxiety and depression. Believe me, I’ve had it all, but I still don’t know if the chicken or the egg came first.

Well, all of these things can be cured one way or the other, but the trauma of insomnia is what still haunts its victim, even in the healthiest of times.

I love sleeping, and if nobody wakes me up or if I don’t put my regular three alarms, I can still sleep like a fourteen year old full of raging hormones. This would be a good time to mention that I have checked my vitamins, changed my diet, and so on. So, sometimes, being more than averagely spaniardized, I take a nap. A good old siesta.

And I fall asleep within minutes. I sleep deeply and heavily and I struggle with getting up. When you remove the pressure of going to bed at night, the thought of the consequences of failing, I’m a sleeping machine. More than I would like even, I tend to think most people live years longer than me, counting only waking hours.

When you have or have had insomnia, the bed is your enemy. No matter how comfy it is, no matter how expensive your silky bedsheets are, your bed is a monster, and it tortures you and gives you the feeling of performing an impossible task. You go on stage in front of a million people with an instrument you have never played before. You know you will fail and you know that it will make you desperate on surviving it and that it will ruin your day. Tomorrow too, probably even the next one.

My body becomes alert. If I go through every part of it, I can feel how my mouth is twitched in a grim, how my forehead is wrinkled and my fists closed. When I go through each one of them, they have twitched again as soon as I reach the starting point. The feeling of lying down doesn’t feel relaxing anymore, instead, it feels like rays of lightning inside my body are making me want to change position, only to change again and again. 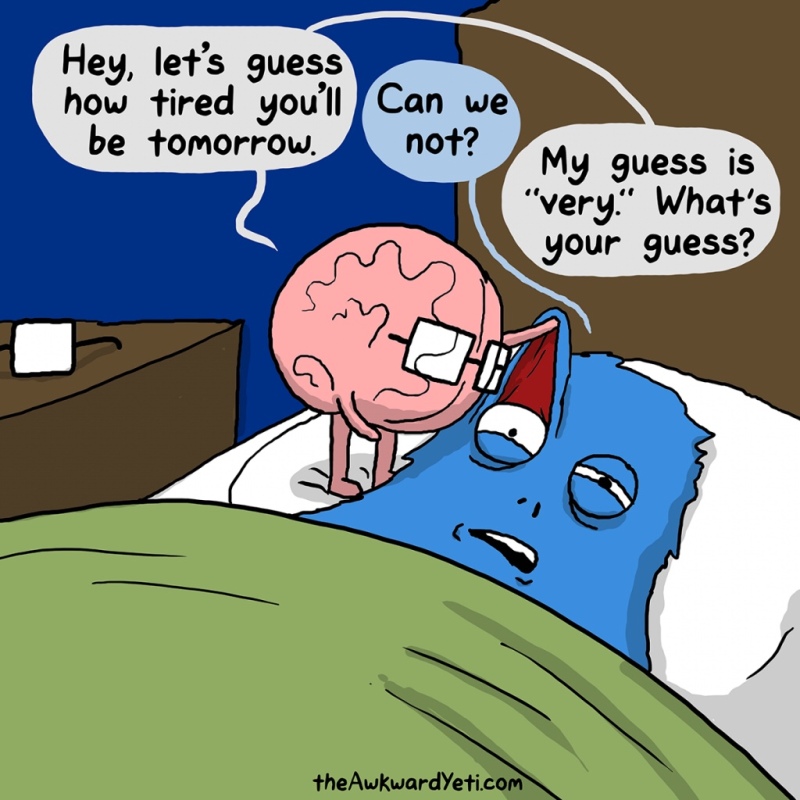 I sleep on the bus. On the train, on the tram, and on the subway, even on cheap Ryanair flights with absolutely no space for my way longer than average body. In fact, I may relax so deeply that I start drooling on the shoulder of my neighbor. Most of the time it’s my husband’s, but not always.

So I have started imagining my Zs as evil little bastards that for some reason despise my bedroom, and live to mess me up. They make up for it by showing up at absolutely any other opportunity. In class. When I read. And don’t even get me started on mornings. It’s like they return after a hard night out partying, only to have invited a hundred more of them to an afterparty above my head. They’re physically holding me down. Tired is just not descriptive enough. I feel sick. I feel depressed. I feel like I’m dying. And the world is just not made for my kind of folks.

On the bright side, my asshole Zs make me sleep very lightly when I actually do sleep, which results in a number of vivid and complex dreams every single night. I remember them in detail, and I very much enjoy having my slightly overly developed imagination go wild, bringing me new stories every time I beat my enemy and actually drift off. It is indeed a useless and energy-consuming (oh, the irony) kind of sleep, but it is definitely interesting. Being a creative person, I often find them inspiring, and I try to write them all down.

I have of course found several tricks to beat my Zs. For some reason, these things seem to keep them where they should be for long enough to let me relax;

• Meditation apps, – but not all of them, and if I listen to the good ones too long, they stop being Z magnets

• The music from the original Blade Runner movie, – mostly successful, but the same goes here, – do not listen to it every night! If you learn every musical gesture by heart, the Zs will leave

• Counting, – not sheep, but breaths. Listening to one’s own breath can be very soothing and it’s difficult to get higher than about five hundred before you a) fall asleep, or b) get desperate and go nuts

• Staring at the inside of your eyelids, – this tends to work, but beware! Doing this for too long can make you see some weird and potentially scary LSD-like shit that might wake you up and leave you even more nervous and tense. This could definitely be something that just happens to me, I might be insane or possessed or something, but there is a chance I am not alone, right? Just say yes.

So, those were my tricks. Do them stealthily, so the Zs don’t realize that you’re putting them in a cage. Seriously, whistle unsuspiciously or something. Don’t underestimate them. They’re mean. At least mine are.

Ok, time for bed. Good night. Or, enjoy never getting those wounds that paralyzed people that lay still for too long get. While getting to know every little detail of your ceiling, accompanied by the snoring beast beside you. Every insomnia victim has an anti-insomnia sidekick.

Unfortunately, I’m the main character in this story.