Let me drop the bomb, – stereotyping is fun! BUT, just as long as the writer (and preferably the reader) is aware of what (s)he is doing. Then you can call it ironizing, which is somehow making fun of people who stereotype for real, although lots of stereotypes have some truth to them; after all that is how they establish.

To get away with stereotyping, it is always a good idea to start with your own kind. Self ironizing is (at least in my opinion) one of the greatest inventions there is, although not appreciated by everyone. It does however give an innocent touch to the ugly phenomenon of ~generalization~; one of today’s society’s biggest sins.

So obviously, I have chosen to stereotype musicians. After all, I am one myself, and thus I hope to be forgiven.

Let me start with the strings (I know them the best). Violinists are serious, socially awkward and often Chinese. They have spent most of their childhood years practicing, which explains both their skills and their short social antennas (they have simply spoken more to their instruments than to humans). They are also ambitious and their identity and self-esteem are totally dependent on what they do. They are usually looking to be soloists, and God forbid they ever have to play the second violin. Establishing quartets can hence be a challenge, as the two violinists will constantly battle to play the first.

Remember the violinists that didn’t want to play the second violin? Well, the level even after this humiliating position, is playing the viola. Viola players themselves like to make other excuses, like having too long arms for the violin or preferring a deeper sound, but we all know the truth. The viola quite often has the most insignificant part in the piece and is therefore not as technically advanced as the parts of its fellow strings. But they could play super impressive stuff. If they wanted to.

Brace yourselves for what will possibly be a less objective characteristic, since this article is written by a cellist. Cellists are a somewhat complex group, where they (we) on one hand are known to play the most beautiful and melancholic instrument (no, not just in the opinion of cellists), and at the same time often receive comments about their slightly sexual position while playing, at least that is the case for women. As one of my teachers once put it (in a jokingly, not creepy way!); Karina, you are going to make a living from what’s between your legs! He was in fact wrong, but none of us knew back then. In general, cellists are known to play overly loud and the cello is absolutely an instrument that makes you feel appreciated, being that also pop-musicians have wet dreams about adding cello solos to their songs. The con is all the carrying. And the fact that like zero point one percent of the population can distinguish a cello from a guitar. 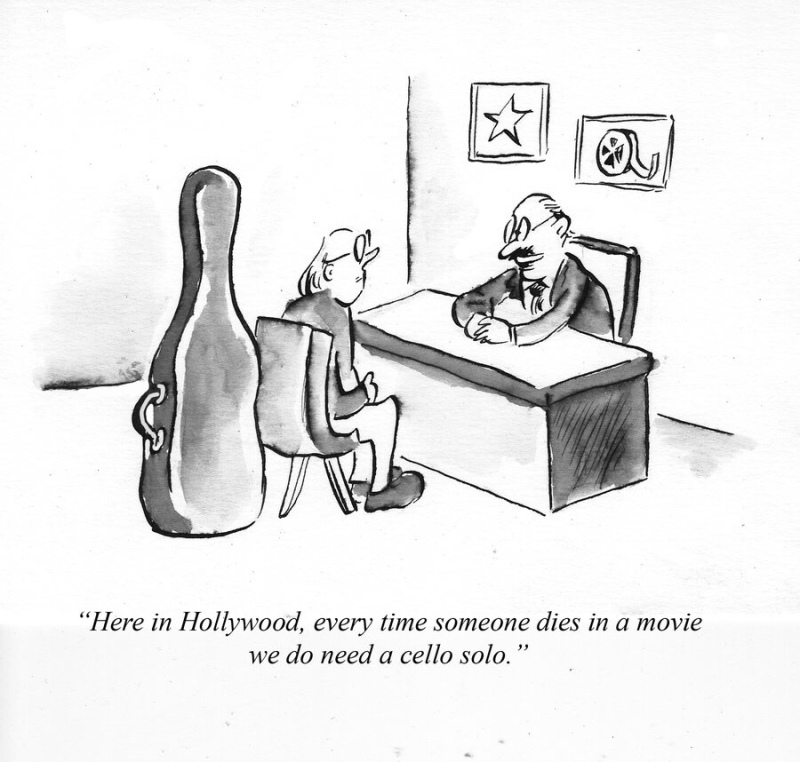 These guys are laidback. They are the ones you will find dragging their huge instrument through the corridors, wearing sweatpants and wool-socks (especially if they are jazz bass players). Maybe they have realized that since no one can see them when they play, it does not really matter what they look like. Bass players also tend to have very big cars, and a supernatural ability to make things (instruments) fit into places that to others seem physically impossible. 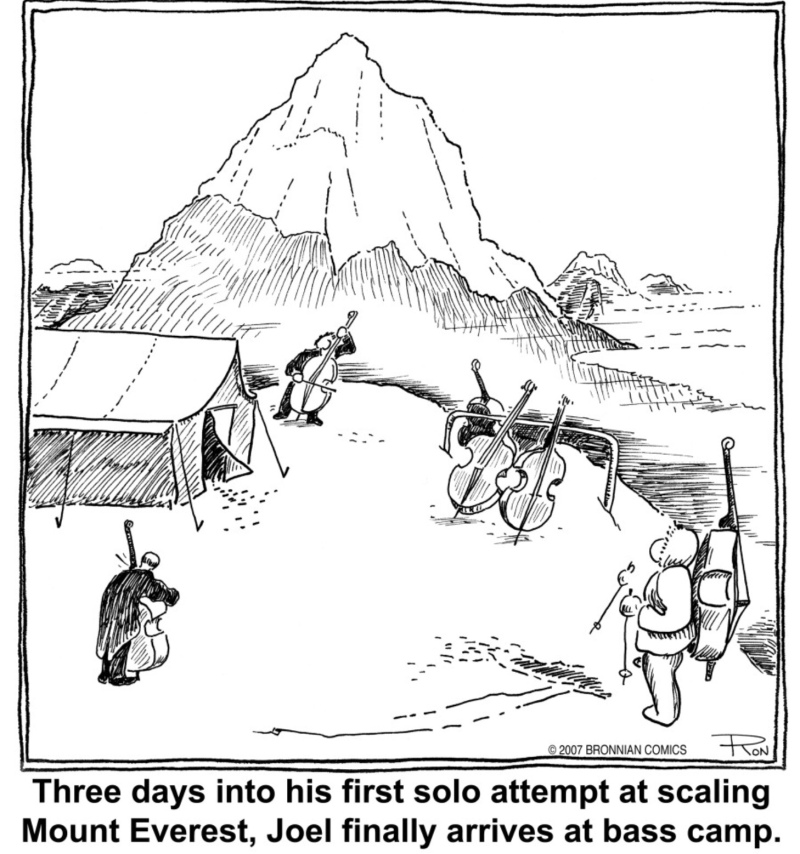 Percussionists usually take the laidback-ness one step further. These are the guys that might show up for rehearsal wearing pajamas and still being tipsy from never really having gone home from yesterday’s party. They still do their job though, although no one really understands how. In addition, percussionists spend their breaks (and probably spare time) looking at inappropriate youtube videos, telling nasty jokes, and watching porn. Do not enter the percussionist rehearsal room unless you can handle this. It is however worth the risk, because getting to know them will make you understand that deep down they are just a bunch of soft-hearted little puppies.

Flute players are usually women or effeminate men. It sounds like a stupid myth, but there is a great deal of truth to it. Flutists are usually well prepared for rehearsals, for the simple reason that it is difficult to hide their sound. They are also the forever victims of jealousy from cello and bass players, and other musicians that are incapable of carrying their instrument with even a small amount of subtleness. 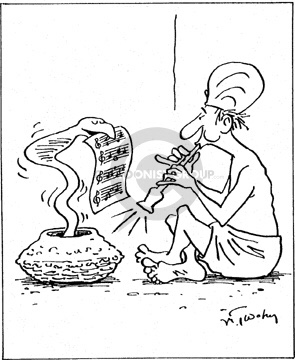 These guys are the violins of the woodwind gang and tend to aim for ambitious positions such as soloists or first clarinet players. They spend their rehearsing hours making funny faces, playing as smoothly as possible, while despising gypsy clarinet players and their sharp timbre. Clarinets also have a kind of secret society where they all know each other, and they frequently attend clarinet parties. God knows what they do there. (Do we want to know?)

Being the underdog of the wind section, oboists are very easily offended, and whatever you do, do never (NEVER) address them as clarinetists. They also cling to the idea of the greatness of using double reeds, and rumor has it that they push so hard while playing they all end up in the deepest corners of the psyche ward. In other words; expect some eccentricity (the degree will depend on when they started their oboe playing career.)

There is little to say about them because they are so few. That results in significantly fewer difficulties regarding job opportunities, and because everyone always lacks a bassoon player, a bassoon player is always welcome.

The total outcast of the brass section. There is nothing in between what the horns play, – either they are all ompa ompa (or just – pa), or they are playing something beautiful and slow, that they never really get credit for, since they’re so far back in the orchestra that the audience can’t see them properly. Horn players also tend to practice so much that their mouth position gets stuck to their lips and they go around with a constant duck face.

These guys love their instrument, and they prefer playing it as often and as loudly as they can. When the brass has a solo fanfare, the trumpet players sometimes look like they are going to throw their instruments away and bang their chests with their fists. They also love to stand up after their soloes.

If the horn players are the brass outcasts, the trombonists are the underdogs. They stay in place and do their job without making too much of a fuzz about it. If you however give them a glissando passage, they will light up and actually look like they love playing the trombone. But that doesn’t happen a lot. The trumpet players usually steal their thunder.

These lonely creatures are the kings and queens of making sounds that to most people sound like farts of cataclysmic scale. They also tend to have a lot of rests, so they are usually well-read, being classic literature or comic books. Tubaists are usually alone on their instrument in the orchestra, which means they remain unaffected by the trends that dominate other instrument groups. Instead, they do their own thing, giving absolutely no fucks.

Jazz guys are a species of their own, being almost unable to read music, but great at playing duba duba duba and then applaud. Socially they are usually more capable than classical musicians because they often practice together and actually listen to their co-musicians when they play, instead of just looking at the guy with the stick.

Being extremely focused on coming off as intellectuals, most of these guys chose their specialization because they were too lazy to choose an instrument to practice so much it eats up your entire social life. Composers like to boost their egos by reading French poetry (and making sure everyone notices) and knowing words that most people don’t. Composers do not like to seem materialistic, so they are usually sloppy looking, but make no mistake; the look is carefully planned. They also sometimes make music.

Greetings from your favorite cynical and materialistic composer!